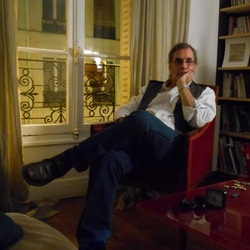 John Greiner-Ferris in Paris.
I always knew I wanted to be a writer. From little on. I was the kid in the 3rd grade whose paper the teacher would always read aloud to the class. And if she didn't, I'd get mad and make sure my next paper was read. I always figured I'd be holed up in a cabin in Kentucky, in a worn flannel shirt, subsisting on egg noodles and ketchup, which to this day is comfort food for me, working on the Great American Novel.

Never in my wildest dreams did I think I'd end up in the theater. I grew up in a working-class family in southern Ohio. Until I was about ten, we lived in a four-room, one-bedroom apartment. My sister and I shared the bedroom, and my parents slept on a bed in the dining room. My father never made any more than $10,000 a year in his life.  If you had told me one day I'd be an actor, I would have just laughed. The idea would have been ludicrous. Later in life, when I was an actor, I would stand in the wings before making an entrance and pinch myself. I considered it an honor and a privilege to be on a stage, me acting out the words and thoughts of some awfully talented writers.

Because of how I was raised I have an affinity for, and an understanding of, people who don’t quite fit into society. These people inspire me, my purpose as an artist is to give voice to them, and my vision is a diverse theater that promotes new work.Because of this, I write a lot about people on the fringe seeking out their own place at large costs. If you want to become the real you, there is a hefty price to pay, and I make all my characters pay the price.

I was introduced to the theater when I was an undergrad at Ohio University. Among other things, I saw a production of William Inge's The Dark at the Top of the Stairs. I was enthralled. I sat in the audience with my mouth hanging open. There, on stage, were people who talked like me and acted like me. I didn't know it could be like that. Inge did that for a lot of people. So did August Wilson and Sam Shepard, two more playwrights who influenced me early on. They all put their own unique vision of the world on stage, and America never saw it before. Later, I was introduced to Caryl Churchill, Anne Washburn, Sarah Kane, and Jose Rivera. That's what I want to do. They wrote about who and what they knew, and pushed the theater to tell their stories, and that's what I want to do and why I write about hog farmers, donut shop waitresses, single moms, writers, and other misfits.

In 2010 I was accepted as a graduate student with a scholarship in pursuit of a Masters in Playwriting at Boston Playwrights’ Theater at Boston University. I also was awarded a teaching fellowship in creative writing at Boston University. I completed the program in 15 months with a 3.96 GPA. (One crummy A-.) With me having less than three years of experience, my thesis, Highland Center, Indiana, was a semi-finalist at the 2012 Eugene O'Neill Playwriting Conference.

Because I feel strongly about artists taking control of their own work, in 2013 I co-founded Boston Public Works Theater Company, a company of playwrights who circumvented the traditional route to production and produced one play each, then we disbanded in 2017. As a result of my work with Boston Public Works, I founded Alley Cat Theater, which is the next logical, artistic step for me, from taking control of my artistic career by producing my own and other playwrights' plays, to starting an entire theater founded on my artistic sensibilities.

I hope this might help you understand a bit more about my work and who I am, and if you'd like to work together. If you have any questions or comments, please don't hesitate to drop me a line in the Contact section of this site.

A partial list of productions and readings include:
Red Dog, staged reading, Whistler in the Dark Theater, Boston, Mass., 2010

Turtles, development and a reading, The Inkwell, Washington, DC, 2012

The Lord of the Chairs, Boston One-Minute Play Festival, 2014